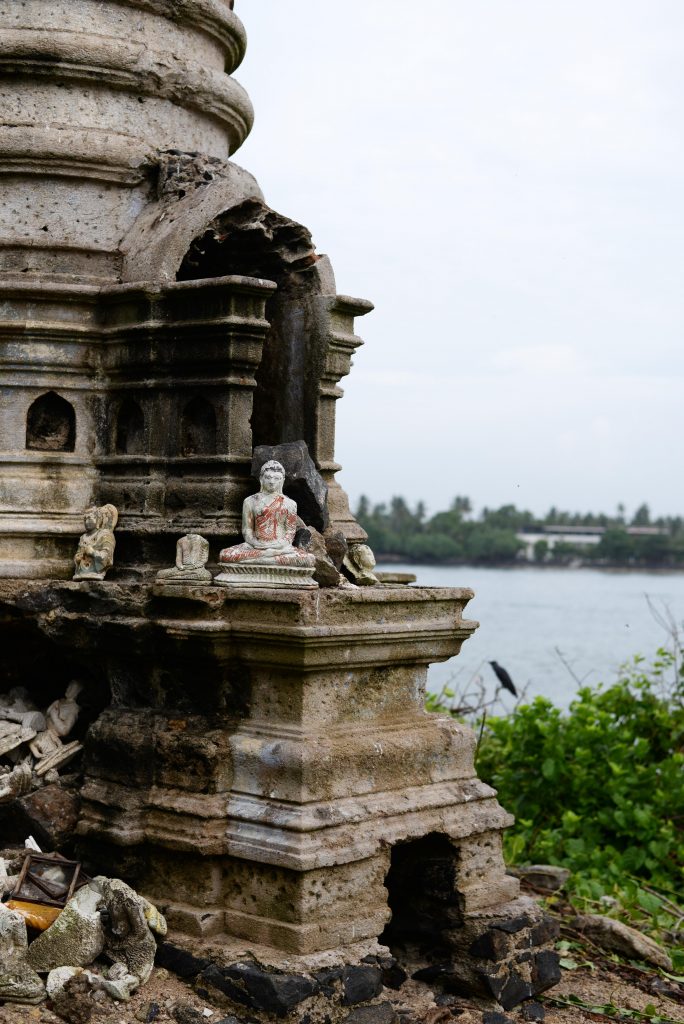 History of the ruins of this island goes back to about 120 years and an interesting story lies about the building of the Buddhist place of worship. The mains artifacts on this jungle island is a ruined stupa made to Thai architecture and a mysterious stone arch.

According to history, a prince named Prisdang of Siam (now Thailand) who had been educated in England and had served as a ambassador for number of European countries had fallen out with the monarch of Siam and had escaped during a visit to Japan in 1890 and had reached Sri Lanka in 1896. He had joined the priesthood on the 1st of November taking up the name Jinawansa Thero as a student of Waskaduwa Sri Subuthi Thero.

He had traveled towards Matara and noticing this serine island away from people, had decided to make this his adobe living and learning the way of Buddhism. It is said that a rock called Ethagala (Elephant Rock) has had a elephant figure and the date 1894.06.26 carved.

Jinawansa Thero has moved to the Galagodiyana island around 1896 and he has been served by two laymen called Odiris De Silva Gajaweera and Hewagalamulage Babun Appu who resided in Paramulla, the closest edge of the land to the island. Odiris De Silva Gajaweera is said to be 6 feet 3 inches tall and its said that it was not a uncommon site to see Odiris carrying the priest on his shoulder and crossing the sea when Jinawansa thero wanted to come to shore. During this stay, the villagers of Paramulla had provided the meals to Jinawansa Thero who had been called Kumara Hamuduruwa ( Prince Thero). They had also built path across the sea to the island using rocks. Parts of this path is still visible but cannot be used due to some parts been washed away.

Jinawansa Thero has lived at this site till 1905 when he came to Colombo and took over Kotahena Deepaduptharamaya Temple and continued on spreading Dhamma. In 1911 had departed to Siam to attend King Rama V’s funeral but was forced to disrobe (another prince made it a prerequisite to view the King’s remains) and did not permit him to re ordain himself in the Thai sangha system. A German Buddhist priest called Vappa, a student of Ghanaloka Thero of Kotahena Deepaduptharamaya has been also living in this island with Jinawansa Thero for a while.

The Stupa and its buildings are said to be designed by Jinawansa Thero based on Siamese (Thai) tradition. The stupa has been built with entrances from four directions. There are two stone inscriptions but to dilapidated to read. In addition, there is a mystic entrance built with stone bolder held together for no apparent reason.